Elgin Baylor One of NBA’s Original High-Flyers has died. He was not only a trailblazer on the basketball court, he was also a trailblazer for social justice. Baylor died on March 22, 2021, at age 86 of natural causes. He is survived by his wife Elaine, his son, Alan, and daughter, Alison.

Elgin Gay Baylor (September 16, 1934 – March 22, 2021) was a former professional basketball player, coach, and executive. He was a bucket getter. He played 14 seasons as a forward in the National Basketball Association (NBA) for the Minneapolis/Los Angeles Lakers, appearing in eight NBA Finals. Baylor was a gifted shooter, strong rebounder, and an accomplished passer.

Renowned for his acrobatic maneuvers on the court, Baylor regularly dazzled Lakers fans with his trademark hanging jump shots. The No. 1 draft pick in 1958, NBA Rookie of the Year in 1959, 11-time NBA All-Star, and a 10-time member of the All-NBA first team, he is regarded as one of the game’s all-time greatest players. In 1977, Baylor was inducted into the Naismith Memorial Basketball Hall of Fame.

Baylor spent 22 years as general manager of the Los Angeles Clippers. He won the NBA Executive of the Year Award in 2006. Two years later he was relieved of his duties as the Clippers’ General manager shortly before the 2008–09 season began.

His popularity led to appearances on the television series Rowan and Martin’s Laugh In in 1968, the Jackson Five’s first TV special in 1971, and a Buck Rogers in the 25th Century episode, “Olympiad”.

The Minneapolis Lakers used the No. 1 overall pick in the 1958 NBA draft to select Baylor, then convinced him to skip his senior year at SU and instead join the pro ranks. The team, several years removed from its glory days of George Mikan, was in trouble on the court and at the gate. The year prior to Baylor’s arrival, the Lakers finished 19–53 with a squad that was slow, bulky and aging. Baylor, whom the Lakers signed to play for $20,000 per year (equivalent to $180,000 in 2019), was the franchise’s last shot at survival.

With his superb athletic talents and all-around game, Baylor was seen as the kind of player who could save a franchise, and he did. According to Minneapolis Lakers owner Bob Short in a 1971 interview with the Los Angeles Times: “If he had turned me down then, I would have been out of business. The club would have gone bankrupt.” 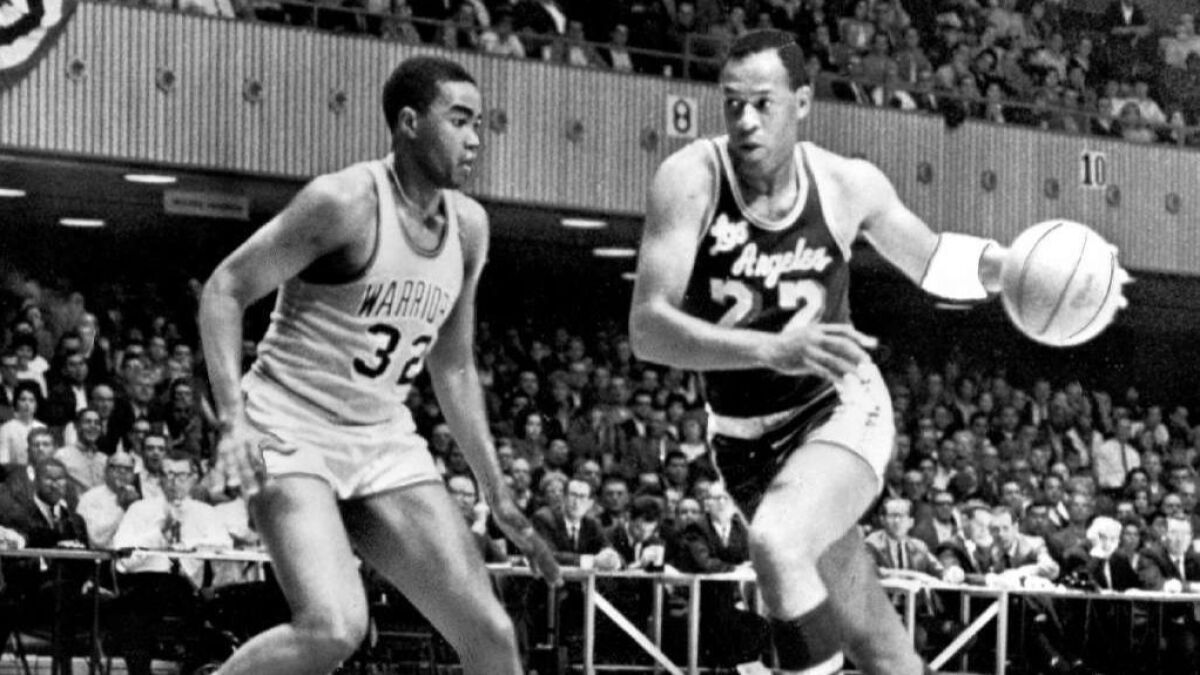 Baylor finally retired nine games into the 1971–72 season because of his nagging knee problems. The timing of his retirement caused him to miss two great achievements—the Lakers’ next game after his retirement was the first of an NBA-record 33 consecutive wins, and then the Lakers went on to win the NBA championship that season. The Lakers awarded Baylor a 1972 Championship Ring even though he had retired earlier in the season.

In 1974, Baylor was hired to be an assistant coach and later the head coach for the New Orleans Jazz, but had a lackluster 86–135 record and retired following the 1978–79 season. In 1986, Baylor was hired by the Los Angeles Clippers as the team’s vice president of basketball operations. He stayed in that capacity for 22 years before reportedly resigning in October 2008 at the age of 74. During his tenure, the Clippers managed only two winning seasons and amassed a win-loss record of 607 and 1153. They also won only one playoff series during this time.

Baylor was selected as the NBA Executive of the Year in 2006. That year the Clippers won their first playoff series since 1976, when the franchise was located in Buffalo, New York, and named the Buffalo Braves.

In February 2009, Baylor filed an employment discrimination lawsuit against the Clippers, team owner Donald Sterling, team president Andy Roeser, and the NBA. He alleged that he was underpaid during his tenure with the team and then fired because of his age and race. Baylor later dropped the racial discrimination claims in the suit. Baylor’s remaining claims were rejected by a Los Angeles state court jury on March 30, 2011, by a unanimous 12–0 vote.