(Courtesy of Youtube) Welcome 2 America | Available 7.30.21 – Pre-Order Now! – https://Prince.lnk.to/W2AAY​​ Shop exclusive Prince music and merchandise at the Official Prince Store – https://store.prince.com​​ Recorded in the spring of 2010 and then mysteriously archived by Prince, the statement album Welcome 2 America documents Prince’s concerns, hopes, and visions for a shifting society, presciently foreshadowing an era of political division, disinformation, and a renewed fight for racial justice.

The Deluxe Edition combines the 2LP and CD versions of the album with a never before released Blu-ray of Prince’s full April 28, 2011 performance at The Forum and is presented in 1080p with stereo, 5.1 surround and Dolby Atmos audio.

Captured midway through his marathon “21 Nite Stand” at The Forum in Inglewood, California, this performance documents the spontaneity and incendiary energy of that historic portion of the Welcome 2 America Tour – an audiovisual testament to the proclamation he made at the launch of the tour in October, 2010, stating “Bring friends, bring Ur children, and bring foot spray, because… it’s gonna B funky.”

The performance features a cameo by recent GRAMMY-winner Ledisi and covers of Bob Dylan’s “Make You Feel My Love” and Roxy Music’s “More Than This” alongside Prince favorites including “17 Days,” “Controversy,” “1999,” and “Purple Rain.”

Experienced as a complete package, the Deluxe Edition provides a multidimensional and immersive view of Prince’s creative genius during his spontaneous, energetic, and thought-provoking Welcome 2 America era.

(wiki) Prince Rogers Nelson (June 7, 1958 – April 21, 2016), mononymously known as Prince, was an American singer-songwriter, multi-instrumentalist, record producer, dancer, actor, and director. He is widely regarded as one of the greatest musicians of his generation. Considered a guitar virtuoso, he was well known for his eclectic work across multiple genres, flamboyant and androgynous persona, and wide vocal range which included a far-reaching falsetto and high-pitched screams.

He was also known for his prolific output, releasing 39 albums during his life, with a vast array of unreleased projects left in a vault at his home after his death; it is believed that the vault contains dozens of fully produced albums and over 50 music videos that have never been released, along with various other media.

He released hundreds of songs both under his own name and multiple pseudonyms during his life, as well as writing songs that were made famous by other musicians, such as “Nothing Compares 2 U” and “Manic Monday“.  Estimates of the complete number of songs written by Prince range anywhere from 500 to well over 1,000. 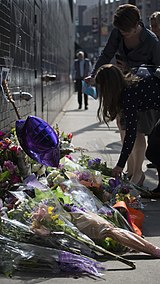 Prince saw Michael T. Schulenberg, a Twin Cities specialist in family medicine, in Excelsior on April 7, 2016, and again on April 20. On April 7, he postponed two performances at the Fox Theatre in Atlanta from his Piano & A Microphone Tour; the venue released a statement saying he had influenza.
He rescheduled and performed what was to be his final show on April 14, despite still not feeling well. While flying back to Minneapolis early the next morning, he became unresponsive, and his private jet made an emergency landing at Quad City International Airport in Moline, Illinois, where he was hospitalized and received Narcan, a medication used to block the effects of opioids, especially following an overdose. Once he became conscious, he left against medical advice.
Representatives said he suffered from dehydration and had influenza for several weeks. Prince was seen bicycling the next day in his hometown of Chanhassen. He shopped that evening at the Electric Fetus in Minneapolis for Record Store Day and made a brief appearance at an impromptu dance party at his Paisley Park recording studio complex, stating that he was feeling fine. On April 19, he attended a performance by singer Lizz Wright at the Dakota Jazz Club.

On April 20, 2016, Prince’s representatives called Howard Kornfeld, a California specialist in addiction medicine and pain management, seeking medical help for the star. Kornfeld scheduled to meet with him on April 22, and he contacted a local physician who cleared his schedule for a physical exam on April 21.

On April 21, at 9:43 am, the Carver County Sheriff’s Office received a 911 call requesting an ambulance be sent to Prince’s home at Paisley Park. The caller initially told the dispatcher that an unidentified person at the home was unconscious, then moments later said he was dead, and finally identified the person as Prince.

The caller was Kornfeld’s son, who had flown in with buprenorphine that morning to devise a treatment plan for opioid addiction. Emergency responders found Prince unresponsive in an elevator and performed CPR, but a paramedic said he had been dead for at least six hours, and they were unable to revive him. They pronounced him dead at 10:07 am, 19 minutes after their arrival. There were no signs of suicide or foul play.

A press release from the Midwest Medical Examiner’s Office in Anoka County on June 2 stated that the musician had died of an accidental overdose of fentanyl, at the age of 57.