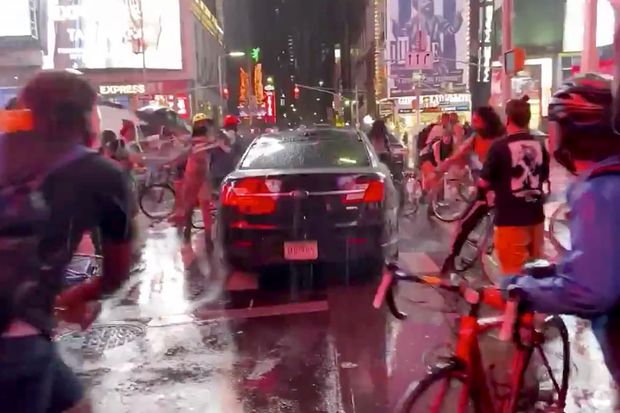 Cell phone video shows a black car with tinted windows drive through a crowd of protesters in Times Square. They chase after the car in the rain, but the driver speeds off. The protesters were said to have recognized the vehicle from the prior counter protests and surrounded it, including a bicyclist who blocked the car from moving further.The vehicle involved appears to be formerly used as a police cruiser, complete with a bull bar in the front, likely purchased at a surplus auction. Police say it was not an NYPD vehicle.

Lashaun is a Multi-Media Content Creator, Radio/TV Host -Owner Cali.FM. Entrepreneur, Music Publicist, Blogger, and former (2016-2020) NBC/CNBC affiliate Broadcaster @KCAA Radio 102.3FM. I am just the messenger. DON'T ask me any Questions and you WON'T get any Answers !!